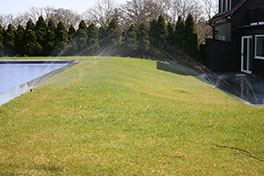 To carry out the optimum watering the system should be divided into irrigation stations / zones, this enables you to water the correct amount to different plants.

Typically grass requires 3.6mm per day, but some areas of the lawn are in a wet area or catch the sun so this will change. Therefore the system should have separate stations.

With all garden watering systems, whether the system has one station manually controlled or a 200 station automatic watering system with weather a station the design will have the same principle.

A garden irrigation system should be designed so that the correct amount of water is supplied to the plant’s particular requirement and is measured in millimetres. Therefore, the watering system should be designed so the plants that require different amounts of water are on separate stations/zones (a station/zone is one or more than one sprinkler controlled by a valve). This could be the same plant type such as grass but some might be in direct sun and the other in the shade.

In addition, the system should be designed so it can apply the correct amount of water the plants require for a specific time such as six hours.

The key components are:

There are four types of sprinklers. For pots, flower-beds and hedges are generally watered using micro sprinklers, drippers or drip line. These operate at low pressure and low flows and can usually operate on the mains water supply. For lawn areas we use pop-up sprinklers. There are two types of nozzles that are fitted to pop-up sprinklers. The larger sprinklers are fitted with standard nozzles which use the same amount of water. Sprinklers fitted with these should have separate valves when they operate on different arcs. For example, sprinklers watering 360 degrees require separate valves to sprinklers that water 180 degrees. The second are sprinklers fitted with Matched Precipitation Nozzles. They apply water evenly irrespective to the arcs of which they are set to.

A sprinkler / group of sprinklers or drippers are called stations. For small systems one station will operate at any one time and a main pipe will feed all the stations. Small stations can run direct off the mains water pipe but we recommend you contact your local water board to ensure you comply with their regulations. Automatic systems use Tap Timers or solenoid valves to control the sprinklers.

Apart from the smaller systems, most will require a pump & tank. This enables the system to use larger sprinklers and larger stations. There are two ways that a pump is controlled. For smaller systems it is common to use a fixed speed pump that is started with a pump starter. For larger systems the pump will be a variable speed pump. This operates so the pump keeps a constant pressure in the system.